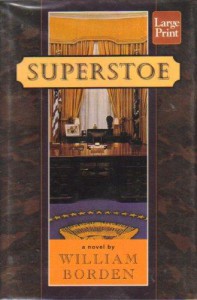 What happens when a group of intelligent, but ruthless men (because women merely exist here to show off cleavage for the men to gaze into) decide to take over the US government and establish an ideal state following Plato’s ‎Πολιτεία?

By creating several germ crises the group of eccentric intellectuals around Paxton Superstoe cause nationwide terror, so the population is frightened enough to cry for a „strong leader“ and elect the candidate supported by Superstoe and his entourage as the new president. After a couple of „accidents“ opposition is silenced and they hold power completely in their hands. Now they can start to shape the USA according to their ideal and force the rest of the world to roll with it.

Superstoe is a political satire mainly about manipulating and taking advantage of the masses and about the things that humans are capable of doing – no matter if they are ordinary or highly intelligent men. Often the laughter gets stuck in your throat though, because some things Borden imagined in 1967 actually became true or are at least very realistic by now.

The author touches on many interesting questions like: is it justified to terrorise your own population to get elected, because you know, that you are the better candidate and you honestly want to work for the greater good of everyone? Are certain strategic attacks, killings or even wars justified to be able to achieve a worldwide disarmament and world peace? Is it in general justified to kill a few for the greater good of the world? And what happens, when the ideal state is finally realised? What happens, if the ordinary men and women are extinguished through planned breeding with only the best of the best remaining? What happens in a state where everyone has the same education and equal possibilities? Is such a state really going to be better or is it just going to be the same (if only on a different intellectual level), because of some basic inherent human characteristics and/or needs?

Unfortunately only very few of these questions are actually followed through, I think because Borden focuses too much on portraying the eccentricity of his characters instead of the story and those underlying questions. Also, I honestly was a bit confused about who is who, and I could not always distinguish them, because although 10 protagonists are not that many (considering I somehow managed to distinguish most of Tolstoi’s characters in War and Peace), but the fact, that they sometimes addressed each other with their first names, last names, nicknames or code names made it hard to follow.

Just a side note – if you want to google this book, don’t get confused about the title, because in 9 out of 10 cases, you will probably find it under the name of Superstore (I have no idea why no one bothers to list the correct title).